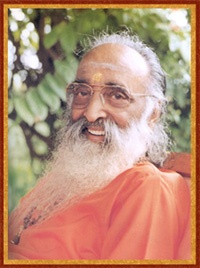 Swami Chinmayananda (1916-1993), the founder of Chinmaya Mission, was born in Cochin, India. Not satisfied with degrees in literature and law or with other worldly aspirations, he pursued the spiritual path in the Himalayas under the guidance of Swami Shivananda and Swami Tapovanam.

He taught the logic of spirituality, while emphasizing the balance of head and heart. "Selfless work, study, and meditation are the cornerstones of spiritual practice," he said. He is credited with the renaissance of spiritual and cultural values in India and with awakening the rest of the world to the ageless wisdom of Vedanta.

His legacy remains in the form of books, audio and video tapes, schools, social service projects, more than 300 full-time Vedanta teachers whom he taught and inspired, and more than 300 Chinmaya Mission centers around the world serving the spiritual and cultural needs of local communities.