Since 1982, Sri Gaurang Nanavaty and Smt. Darshana Nanavaty have enriched the Houston community with the treasured scriptural knowledge of Vedanta. Their most revered Guru, Pujya Gurudeva Swami Chinmayananda, conferred the title of “Acarya” on the devoted couple in 1983. The beloved Acaryas of Chinmaya Mission Houston are also affectionately addressed as “Uncle” and “Aunty” by their expanding Chinmaya family.

As early as in 1979, the Nanavatys, inspired by Gurudeva, gave up their professional careers and immersed themselves in an intense study of the Hindu scriptures during the Vedanta Course at Piercy, California. After that, their commitment to the Vedantic path of life took deep roots in Houston. In more than three decades since 1982, their loving guidance has grown to nourish the scriptural learning and cultural growth of almost a thousand families.

While their selfless work makes their love for the community visible, it is a matter of happy pride to the Houston community that our Acaryas of Houston were recently honored and highlighted among the “Jewels of Gujarat” – in a 2014 Silver Jubilee publication (by Maneesh Media) featuring 80 eminent Gujarati personalities selected from fourteen countries. 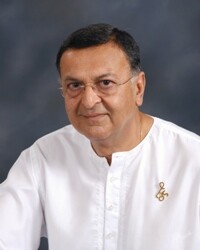 Every Sunday, in two sessions, Acarya Sri Gaurang Uncle conducts satsangas for adults and parents of the Chinmaya Bala Vihar children. His discourses on a wide range of Vedantic texts, from the Bhagavad Gita to the Upanishads, encourage reflection and contemplation while catering to seekers at all levels of experience. He also guides many Study Groups on the other days of the week to make Vedanta applicable in daily life. With a deep sense of caring alongside a framework of discipline, Acarya Sri Gaurang Uncle can make an audience smile and think about many facets of both secular and spiritual life. He travels to various Chinmaya Mission locations in the US, Canada, and overseas to share the wisdom of Vedanta.

Known for his organizational skills, Acarya Sri Gaurang Nanavaty is also a respected trustee of Chinmaya Viswavidyapeeth, an upcoming University for Sanskrit and Indic Traditions, the newest venture of Chinmaya Mission in India. He continues to serve as one of the Directors on the Chinmaya Mission West Board since 1982 when Pujya Gurudeva appointed him. 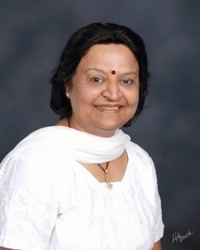 One of her earlier books, “Bon Voyage,” illustrates and conveys the essence of spirituality in a simple and effective style to children. Another of her creative productions, a multimedia CD-ROM version of the Bhagavad Gita titled “Journey to the Truth” is a beautiful gateway to the timeless wisdom of the Gita. It features a captivating combination of art, animation, music, and narrative. Entertaining Bala Vihar plays like “Alphabet Connection” that showcase young talent and Vedantic themes and the Gita 365 mobile app highlight other hallmarks of Acarya Smt. Darshana Aunty. Whatever the creative medium, her ability to teach with love and clarity attracts universal appeal.

Her teachers-training workshops in many Bala Vihars in North America and India are noteworthy for the many creative techniques she employs to make spiritual and cultural learning enjoyable to both children and teachers. She also conducts the weekly Devi group for women and continues to build on the Chinmaya Bala Vihar teaching legacy. 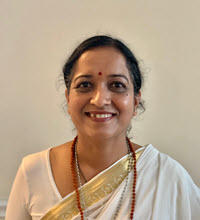 Smt. Mrs.Sneha Sandhane is our newest Vedanta Teacher at Chinmaya Mission Houston. Being a long term CMH member & dedicated volunteer, Snehaji and her family have been a part of the CMH family since 2003. Though being a seeker of Vedanta for many years, her inspiration to embark on the path of spirituality began at an early age. Born and brought up in the traditional family of Rajpurohit (royal priest), Snehaji grew up with a strong background in Samskrta, vedic chanting, and rituals. Through her upbringing and Gurudeva’s teachings, she was inspired to take her spiritual yearning to the deeper study of Vedic scriptures.

With blessings from Guruji, Pujya Gaurang Uncle and Pujya Darshana Aunty, she decided to attend the Vedanta course at Sandeepany Sadhanalaya from August 2017 through 2019 under the tutelage of Pujjya Swami Bodhatmanandaji – the resident acarya of the Vedanta course. Upon her return, Snehaji is contributing most of her time in spreading the knowledge of vedanta through Satsanga and study groups as a dedication to carry forward Gurudeva’s vision and inspire many seekers on the path of spirituality.