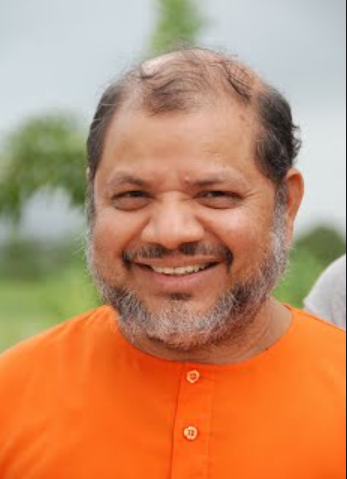 Swami Tejomayananda is the former Head of Chinmaya Mission Worldwide, a position he held from 1993 after Swami Chinmayananda attained Mahasamadhi till early 2017. If Swami Chinmayananda served the cause of Vedanta with his service, knowledge and pioneering qualities, Swami Tejomayananda – fondly addressed as Guruji – completed that with his natural attitude of devotion. This is richly and abundantly evident in his talks, his singing, and his demeanour.

Swami Tejomayananda stands out as a teacher who is eloquent yet humble, putting into practice what he teaches as the right way of living. The spiritual call came to him in 1970 when he heard a Gita discourse given by Swami Chinmayananda. He was inspired to join the Vedanta Course at Sandeepany Sadhanalaya in Bombay. On graduating as Brahmachari Vivek Chaitanya, he served the cause in the field for a few years. Then he was posted at Sandeepany Himalayas as Acarya and conducted a Brahmachari Training Course in Hindi. In 1983, he was initiated into Sannyasa by Pujya Gurudeva and came to be known as Swami Tejomayananda.

Swamiji has conducted over 200 yajnas in English, Hindi and Marathi. He has written commentaries on a few Vedanta text books and translated Gurudeva’s writings to Hindi. He trained two groups of resident students at Sandeepany Mumbai between ’84 and ’88.

He was assigned as Acarya to Sandeepany San Jose in 1988. While he was in San Jose, Swamiji toured all over the United States and Canada giving Yajna-s and camps. He also conducted Vedanta Courses covering all the major Upanisads, Bhagavad Gita, Tulsi Ramayana and Srimad Bhagavatam. Pujya Gurudeva attained Maha-samadhi on August 3rd, 1993. Swamiji was then appointed the Head of Chinmaya Mission.

Swami Chinmayananda’s vision, mission and drive were as if passed on with the mantle and every dream is fulfilled with the same organizational zeal. The physicist, who once hoped to be a teacher, has stunned members and devotees alike with his fluency in Hindi, Marathi, English and Sanskrit. This also means he is aware of their resident cultures and their idiomatic expressions enter his talks and writings with ease and élan. The devotional aspect of his learnings is deeply etched in his innumerable musical renditions – some of which he has composed himself, making him an extremely inspirational singer and composer. This quality enters his discourses with inimitable ease, making his talks exquisite and enjoyable. As a laudable devotional singer, he has recorded several albums with original music and lyrics.